Elmsford, NY (November 19, 2021) --- Broadcaster and PGA professional Brian Crowell has been re-elected as President of the Metropolitan Golf Writers Association by the MGWA Executive Committee. 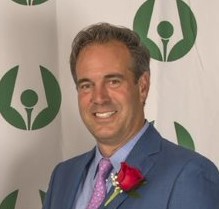 Vice Presidents Mark Cannizzaro of the New York Post, Hank Gola, veteran sportswriter formerly at the New York Daily News and Damon Hack of The Golf Channel have all been re-elected as Vice Presidents of the organization.  Treasurer Dave Donelson of Westchester Magazine will also be returning to his post.

Crowell, who is locally and nationally renowned in the golf industry, is the General Manager of Trump Golf Links at Ferry Point.  He has been a PGA of America golf instructor since 1991, and was named the 2020 Met PGA Professional of the Year.  He was a President of the Metropolitan Section of the PGA, and is a past winner of the Horton Smith Award, which recognizes outstanding and continuing contributions to professional education. While working with the CBS Sports broadcast team, Crowell has covered numerous Masters and PGA Championships, as well as both men’s and women’s U.S. Opens, the Ryder Cup, President’s Cup, and U.S. Amateur tournaments.  He hosted “Lesson Tee Live” on the Golf Channel, and “On-Course” on SiriusXM, and has authored several books: Slice-Free Golf, The Idiot’s Guide to Golf, and Visual Quick Tips: Golf.