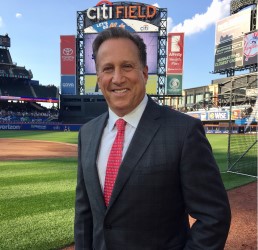 Hank Gola of The Met Golfer, veteran sportswriter formerly at the New York Daily News, was elected as a new member of the Executive Committee.

Beck is in his 20th year at WNBC-TV Channel 4 where, among other assignments, he hosts a Sunday late night show called Sport Final. A winner of nine Sports Emmy Awards and named New York State Sportscaster of the Year eight times (2007-12, 2014-15) by the National Sportscasters and Sportswriters Association, Beck covers the gamut of sports in the Metropolitan area along with national and international assignments for WNBC-TV and NBC Sports

The MGWA Executive Committee elected to donate $10,000 to each of its main charitable entities --- a total of $40,000 --- based on revenues raised in 2017. The association has made the contributions to the three respective caddie scholarship programs of Long Island, New Jersey and Westchester, plus the MGA Foundation. The MGWA’s annual National Awards Dinner is the major fund-raising activity for the group, in addition to several other events it conducts.

The association’s 67th National Awards Dinner will be held Monday, June 18, at the Westchester Marriott in Tarrytown, NY.

The MGWA was founded in 1952 to promote golf journalism, honor golf’s champions and contributors, and raise funds for Met-area caddie scholarship programs, and subsequently added the MGA Foundation as a regular charitable recipient. The association funds the Dave Marr Journalism Scholarship for a graduate student each year at Columbia University. The MGWA over the years has provided more than $2 million to its beneficiaries.