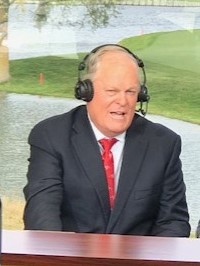 Elmsford, NY (January 15, 2020) -- Two-time Major champion, Hall of Fame former professional golfer, and longtime TV broadcaster Johnny Miller has been named the winner of the Lincoln Werden Golf Journalism Award by the Metropolitan Golf Writers Association.  The award will be presented at the 69th National Awards Dinner on Monday, June 22, 2020 at the Westchester Marriott in Tarrytown, New York.

Johnny Miller joined the PGA TOUR in 1969 and racked up 25 TOUR victories, six international, and four team wins during his long career.  He was the leading money winner on the TOUR in 1974 with eight victories, and he followed that up with four more in 1975.  He bookended those two incredible years with his major championship wins -- the 1973 U.S. Open and the 1976 British Open.  After his retirement from the TOUR, he became the lead golf analyst for NBC Sports, a position he would hold for the next 29 years.  His popularity as a commentator stemmed from his incredibly astute -- and sometimes blunt -- observations as players made their way around the course.  In addition to his TV work, Miller was a columnist for Golf Digest for several years and wrote the book I Call the Shots, which featured his insights into the game, its players, and the future of golf.

The Metropolitan Golf Writers Association's Lincoln Werden Golf Journalism Award, one of the most prestigious awards in sports reporting, is presented to a writer, broadcaster, photographer, artist or other individual for outstanding contributions in the field of golf journalism.  Previous recipients of this coveted award include such well-known correspondents as Jim McKay, Peter Alliss, George Peper, Jim Murray, Chris Schenkel and Pulitzer Prize-winner Dave Anderson.  The most recent recipients include Tim Rosaforte (2016), Jaime Diaz (2017), Hank Gola (2018), and Larry Dorman (2019).

The MGWA has celebrated the game's greatest players, contributors, and organizations at its National Awards Dinner -- the longest-running and often the largest golf dinner in the U.S. each year -- since 1952.  This annual event is attended by nearly 600 guests, representing golf's leading organizations, corporate supporters, Met Area Clubs and Club leaders, as well as local and national golf media.  This year's Dinner will be hosted by MGWA Vice President/PGA Professional and Sirius XM Radio Personality Brian Crowell.

The MGWA has raised well over two million dollars for Caddie Scholarship programs in the Metropolitan New York area; the MGA Foundation; and the Dave Marr Journalism Scholarship at Columbia University.  MGWA contributions from the 2019 Dinner helped fund college scholarships for over 650 young men and women in the NY Metro area this academic year.

Tickets to the Dinner, as well as raffle tickets, may be purchased at www.metgolfwriters.org (you need not be present at the Dinner to win a raffle prize).  For additional information, please contact Robin Sauerhaft at (914) 347-4653 or rsauerhaft@mgagolf.org.