Tuxedo Club to Receive MGWA Club of the Year Award

THE TUXEDO CLUB AS CLUB OF THE YEAR 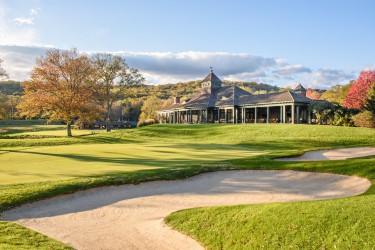 Elmsford, NY (April 10, 2019)—The Tuxedo Club of Tuxedo Park, NY has been selected to receive the prestigious Club of the Year Award from the Metropolitan Golf Writers Association at their 68th National Awards Dinner to be held on Monday, May 13, 2019 at the Westchester Marriott in Tarrytown, NY.

The Tuxedo Club joins a distinguished list of clubs that have earned the MGWA’s Club of the Year Award.  The award is presented to a Metropolitan-area club “for upholding the spirit and traditions of golf through energetic support and consistent dedication to the game.” Baltusrol Golf Club in Springfield, NJ was the first recipient of this award in 1980; the most recent was Fresh Meadow Country Club in 2018.

Conceived by tobacco heir Pierre Lorillard as a fishing and hunting retreat, and with its first clubhouse and “cottages” for members designed by noted architect Bruce Price, The Tuxedo Club opened in May 1886. Golf was quickly added, making Tuxedo one of the oldest golf clubs in the United States.  It has the distinction of having hosted the country’s first interclub match in 1894, involving teams from The Country Club, St. Andrew’s, Shinnecock Hills and Tuxedo.

The construction of the NY Thruway forced the opening of an entirely new 18- hole course several miles from the main clubhouse in the mid-50’s.  Designed by Robert Trent Jones, Sr., the golf course quickly established itself as one of the most beautiful and challenging in the Met Area.  It has hosted every MGA major and has always been a gracious host to USGA Qualifying rounds and to all of the area golf associations.  In addition, Tuxedo has been a loyal supporter of the Westchester Caddie Scholarship Fund, and in recent years has been one of the top fundraisers for the Folds of Honor veteran’s charity.  In addition to golf, Tuxedo offers what is perhaps the broadest range of activities of any club in the Met Area, featuring five racquet sports, a fitness facility, a swimming complex, a boathouse with fishing and sailing and an ice skating rink.

The MGWA has raised well over two million dollars for Caddie Scholarship programs in the Metropolitan New York area; the MGA Foundation; and the Dave Marr Journalism Scholarship at Columbia University.