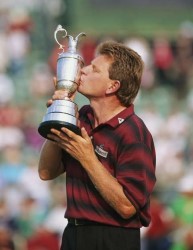 Elmsford, NY   (February  17, 2015) — World Golf Hall of Fame inductee Nick Price  will receive one of golf’s most prestigious honors -- the Gold Tee Award -- from the Metropolitan Golf Writers Association at the 64th National Awards Dinner on Tuesday, June 9 at the Westchester Marriott in Tarrytown, N.Y.

The Gold Tee is the MGWA’s highest honor, awarded to an individual whose career achievements exemplify the best spirit and traditions of the sport of golf.

Price won three major championships during his illustrious career, the 1992 and 1994 PGA Championships, and the 1994 Open Championship (British Open).  In August 1994, Price was ranked number one in the world, a position he held for 43 consecutive weeks; a stretch that has only been bettered by Tiger Woods.

“As great a player as Nick Price has been, he’s even a better person,” said MGWA President Bruce Beck. “We’re very excited to honor Nick with the Gold Tee Award.”

Since 1952, the MGWA has recognized the game’s greatest players, contributors, and organizations at its National Awards Dinner,  the longest-running and often the largest golf dinner in the U.S. each year.  A special video celebrates the six decades of the Dinner …   https://vimeo.com/63849701

Longtime MGWA member Jim Nantz says,  “There is no dinner in America that celebrates golf like this one.”