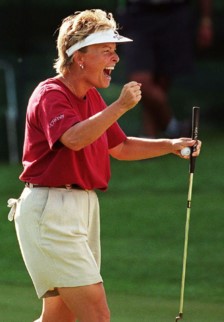 Elmsford, NY (March 10, 2022) —17-time LPGA tournament winner and current golf broadcaster Dottie Pepper will be honored with one of golf’s most prestigious awards —the Gold Tee – by the Metropolitan Golf Writers Association. The award will be presented at its 70th National Awards Dinner on Tuesday, June 21, 2022, at Westchester Country Club in Rye, New York.

Dottie Pepper was born into an athletic family (her father, Don, of the Detroit Tigers, was named an MLB “Rookie to Watch” by Sports Illustrated) and was raised in Saratoga Springs, New York. Dottie quickly gravitated toward golf and won the 1981 NY State Amateur and the 1981 and 1983 NY Junior Amateur tournaments. In 1984, she was low amateur at the U.S. Women’s Open. She graduated from Furman University with a B.A. in Health Sciences in 1987; while there, she won five collegiate tournaments and was a three-time All-American.

Pepper joined the LPGA Tour in 1988, quickly becoming one of its most dominant players. Among her 17 Tour victories were two majors, including her 19-under-par victory in the 1999 Nabisco Dinah Shore, where she still holds the record as the lowest score in relation to par in that tournament. She competed for the U.S. in six Solheim Cup Matches and accumulated a 13-5-2 record. Pepper retired from competitive golf in 2004 and began working as a golf commentator for NBC and The Golf Channel. After eight years, Dottie retired from NBC to concentrate on promoting junior golf as a PGA of America Board member. She was lured back into broadcasting by ESPN in 2013 and signed a contract with CBS Sports two years later. Pepper is currently CBS Sports’ lead walking reporter for the PGA Tour, the Masters and the PGA Championship. In 2018, Pepper was inducted into the NY State Golf Association Hall of Fame.

“Dottie’s accomplishments on the golf course place her among the game’s elite, but her positive influence outside the ropes is just as impressive,” said MGWA President Brian Crowell. “She’s a broadcaster, an author, a public speaker…an outstanding ambassador for golf in so many ways. Dottie is a Major Champion who continues to make a major impact in our sport. The MGWA is proud to add Dottie Pepper to our distinguished list of Gold Tee Award winners.”

The MGWA has celebrated the game of golf and promoted golf journalism since its inception in 1952. Each year, it honors the sport’s champions and contributors at its largest fundraiser, the National Awards Dinner. This highly anticipated event is supported by golf’s leading organizations and corporate supporters, Met Area clubs and club leaders, as well as local and national golf media. Through the Dinner and other events, the MGWA has raised millions of dollars for Caddie Scholarship programs in the Metropolitan New York area, the MGA Foundation, and the Dave Marr Journalism Scholarship at Columbia University. Click here to purchase tickets to the Dinner. For more information, contact Robin Sauerhaft, MGWA Executive Administrator, at rsauerhaft@mgagolf.org.